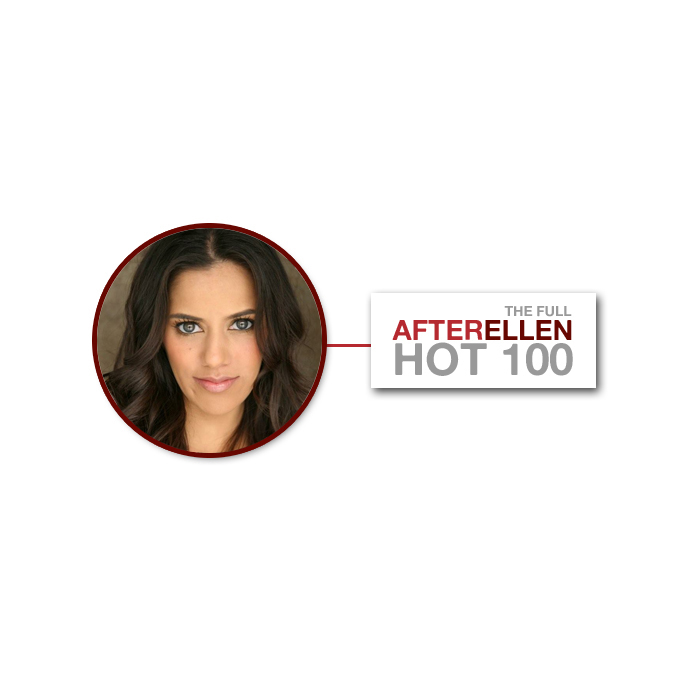 AfterEllen asked Sheetal to weigh in on the women she loves.

I have a hard time with lists. So just know this one comes with a caveat. I love women. I am a huge supporter of women and abhor when we aren’t supportive and loving of one another. I have had the fortune of working with many fabulous ladies and am the better for it. So this was a hard group to narrow down to and I wasn’t able to include many so forgive me for what may seem incomplete. However, just as I write that, I feel like that actually feels better. For me to do a list, it almost has to be “incomplete,” in that it is ever evolving and blooming with the discovery of many a wondrous and hot chick. Cheers!

Rachel Maddow — Her genius and charm is constant. She studies. Worked hard and with the absolute best of them. I could listen to her for hours and I do.

Joan Rivers — A legend. Broke so many barriers and in my opinion, still doesn’t get the respect she so deserves. Love and admire her so much.

Sandra Bullock — In addition to being so talented, she is a tenacious producerextraordinaire. Wicked sense of humor.

Tina Fey — Made it all happen and is still as loyal as they come. Esp. love her and Amy Poehler together. Stays true and continues to push the bar for all.

Janet Jackson — Talk about fierce. Grew up with her and found ‘my sexy’ in her music. ‘That’s the Way Love Goes’ is still one of my all time favorites.

Kathryn Bigelow — Kicks ass in a old boy’s club that still has a long way to go in offering the same respect to women. Steadfast and passionate.

Madhuri Dixit — Bollywood legend that personifies grace and talent. And damn, can she dance.

Viola Davis — Perseveres. Her artistry has always been about the work being the most important. Need more Viola’s out there.

Katharine Hepburn — How she lived in her days…just listen to her speak. I dare you to not be inspired.

Gloria Steinem — Insert all encompassing adjective here. Meeting her has been a wish of mine from the 1st time I ever saw her speak.

Cate Blanchett — The kind of actress I would love to be. Melts into every character. Theater is a part of her soul.

Jane Fonda — “What would Jane do?”‘ I often say that to myself. Need I say more?

Mariska Hargitay — Mesmerizing. Can’t get enough of her. I have had many an SVUmarathon.

Lynette Woodard — Wrote a letter to her when I was a kid. Was in awe of her on the court. She changed women’s basketball and I have been a fan for life.