One of the most popular Greek sites, Enallax, talks to Sheetal about her career choices and heart.

With an impressive body of work, astonishing performances and lots of studies on your resume, it is hard not to pay attention to you. It seems to me that there could be no way you wouldn’t have made it. You are endowed by nature (or your parents) with an incredibly rare beauty and talent. As if that were not enough, you decided to enrich your knowledge by getting accepted in Tisch School of the Arts at NYU, which happens to be one of the best universities in America. You graduated from it with honors and your studies in theatre and films continued even though you were already starring in films. I have to admit that your theatre and film studies are truly brilliant. You had prestigious teachers like Wynn Handman, Kristin Linklater and Milton Katselas that have trained actors like Michael Douglas, Denzel Washington, George Clooney, Michelle Pfeiffer and many others.  Do you believe that your extensive studies have helped you achieve your goal and become an actress or was it something you just truly loved and wanted to excel at it? Does it even count to have a degree in Hollywood or is it all about whether you are what they are looking for in a certain audition?

Thank you so much for the kind words. I can’t say enough about training. I think it’s vital and should be continuous. It can take different forms depending on what works for the person because it’s such a personal thing but we need a playground. I know I do. I like an environment where I can push myself and work out my acting ‘muscles.’ I like trying new things. Failing at them. Figuring out what works. Not resting on my laurels. It’s the only way to raise the game.

It seems like your way to stardom was not a rocky one since you already had your first major role in the 1999 film “ABCD”, while your performance was praised both from the Hollywood Reporter and Rolling Stone. What else could a young actress ask for? After that, films kept coming and you kept starring. Has it ever been a time in your life where you had that many rejections that you even thought about giving up?

Ah, but it has been quite rocky. There has been tremendous heartbreak and frustration. That’s not the stuff the public generally hears about though. Trust me, I have a very long list of roles that I haven’t gotten that I would have loved to have played. And it sucked. There are no bones about it. And yes, I have thought about throwing in the towel a number of times. There have been some tough nights. But it’s the life of an actor. It’s all part of it. There are so many ups and downs, you just have to persevere and remember why you are doing it. Every actor goes through it. It’s the hardest profession but you stay grateful for what you have and get back to it. Stay focused on the work.

How harsh is Hollywood after all? Is it at all meritocratic? I wouldn’t believe it if you’ d tell me that in all those years of your career no one tried to exploit you and take advantage of your beauty by offering you a role in exchange. How do you react to such propositions and does it frustrate you to know that the entertainment industry mostly works like that and that talented people won’t succeed just because they don’t have the right connections or because they don’t want to lose their values?

Yeah well I think that’s an unfortunate truth in the world we live in. And I will just say, there are no shortage of douchebags to go around. You just have to know your own boundaries and stay with the integrity of your heart.

One sacrifice i know you are not making is watching your diet. You are addicted to Doritos, you eat a whole pizza by yourself and in general you are eating 3000 calories per day. In the past i used to ask my friends : how many times do you eat per day? Now i ask them : how many days per week do you eat? I suppose that most Hollywood actresses must be starving themselves in order to always look thin. But then again you are so energetic with all the sports that you don’t need to thank your good metabolism. Skydiving, hiking, bungee jumping. It looks like you have completely conquered fear. Auditioning must seem like a piece of cake compared to those activities! How much do your friends envy you for eating that much and not gaining any weight?

I actually wrote a blog about my struggles with body image! 🙂

You always talk about the importance of having the right agent. But how much harder would it be for someone that cannot afford one and is totally on his own?

Afford one? Having an agent should not cost you anything. So if someone is charging you for representation, get out immediately. That’s shady business. An agent gets a commission (which can vary) of the work they get for you. As far as importance, it really depends. It’s necessary eventually but there is a tremendous amount of work that you can seek out on your own. I didn’t have an agent when I first graduated and submitted myself for projects directly. I would wake up and get all the trades and be diligent in my mailings. Made cold calls. You have to hustle. You have to be disciplined and once people start seeing your work, things will naturally progress. And btw, the hustle should never cease. Remember an agent only gets a percentage for a reason. You are responsible for a lot and need to bring things to the table as well.

What is the craziest incident you’ ve had with a fan of yours? Are they more zealous in the USA or in India? Have they ever made you feel uncomfortable?

Lol. For the most part, everyone is great and respectful. But yes, there have been instances that have gotten dicey but truly, it’s only because they are excited so I don’t get too upset by it. In all the years I have been doing this, and as easy going as I am with stuff like this, it has to be really bad for me to take certain measures and I have only done that probably less than 10x.

You have a huge fan base and you are extremely popular in the gay community.  If i may say so myself, you have become a gay icon! It’s really funny when i watch your movie trailers on YouTube and i see comments like : oh now why is Sheetal kissing a guy in this movie! Do your fans often ask you for advice?

The fans are tremendous and loyal and write to me everyday. I love hearing their stories and yes, they often ask for my advice on things. But I can only share from my personal experiences and I am certainly no authority. I just love the community everyone has built together. Everyone is there for each other.

Another thing that i like about you is that you are very private, you speak only through your movies and all your fans wonder about your personal life. A while ago you were hesitant even about having a Twitter or Facebook account. I’m not even going to bother asking you whether you are dating someone since i know you will be elusive! But i will ask you this: how do you manage to be so protective of your personal details? Are you afraid that the gossip around your life will deprive your fans of the interest about your work?

You just are. It’s a choice. For me, it’s just how I am. As far as my personal life, it’s not something I feel relevant. But I am opening up more and more so you never know what the future holds!

How about marriage and kids? Would you like to see yourself heading that direction in the future, or your career is more important to you?

A family is very important to me but I think it can take several forms, nor am I driven by traditional labels. I would love to have someone who was in it for the long haul with me. Something we create together in our own vision. And I love children.

You are a highly intelligent and motivated woman that doesn’t rest on her laurels. You have a blog in which you write your pensive thoughts and i must say your writing is outstanding (how could it not be, since you ‘ve studied French, Spanish and Hindi. Besides you also speak Gujarati). You truly care about the world and about the less fortunate ones.

Thanks so much! Appreciate that. My blog, ‘Beneath the Sheetz’ has just started and I am still finding my way but I am enjoying it.

And what about the money Hollywood actresses make? Would you say they are overrated and that you do get indeed more money than you could ever ask for?

I don’t think it’s fair to look at it just in those terms nor is that simple. Yes, is entertainment in all forms valued disproportionately from jobs that should be paid more? Absolutely. The fact that entertainment stars, sports stars, etc etc get paid more than teachers and people who sacrifice their lives to protect us everyday is crazy. But we have created that world. Allowed it. That’s for us to rethink and reimagine. But when you are talking about movies or TV shows that bring in a huge amount of money, the talent involved in it are an integral part of that, and should be valued as such. It’s less about being overrated and more about a consumer culture that buys into the nonsense. For ex., the only reason certain reality shows are still on TV, is because people keep watching them! If you don’t want to see certain people or programming, you can say so by not watching! We all have much more power than we know.

Would you ever consider doing Broadway? You can only imagine how excited your fans would be.

I would love it. I grew up in the theater and it’s the foundation of my work. Would be humbling and a pinnacle for me indeed.

From all the movies that you played in, which ones are you most proud of?

I can’t pick 1 as they all represent different things to me but I will say that I am really proud and touched that so many have trusted me with their personal stories. That’s an amazing gift and I don’t take it lightly.

What are your future plans and projects?

Lots of new stuff coming out: REIGN, THE WISDOM TREE, NICE GIRLS CREW. And in development on 3 personal projects of my own – Stay tuned!!

Thanks for all the support.
And it’s been great talking to y’all in Greece! A place very dear to my heart. Not only for being the birthplace of my dear acting teacher, Milton Katselas, but the origin of theater itself! Beautiful country. Much love. ευχαριστώ! [Thank you!] 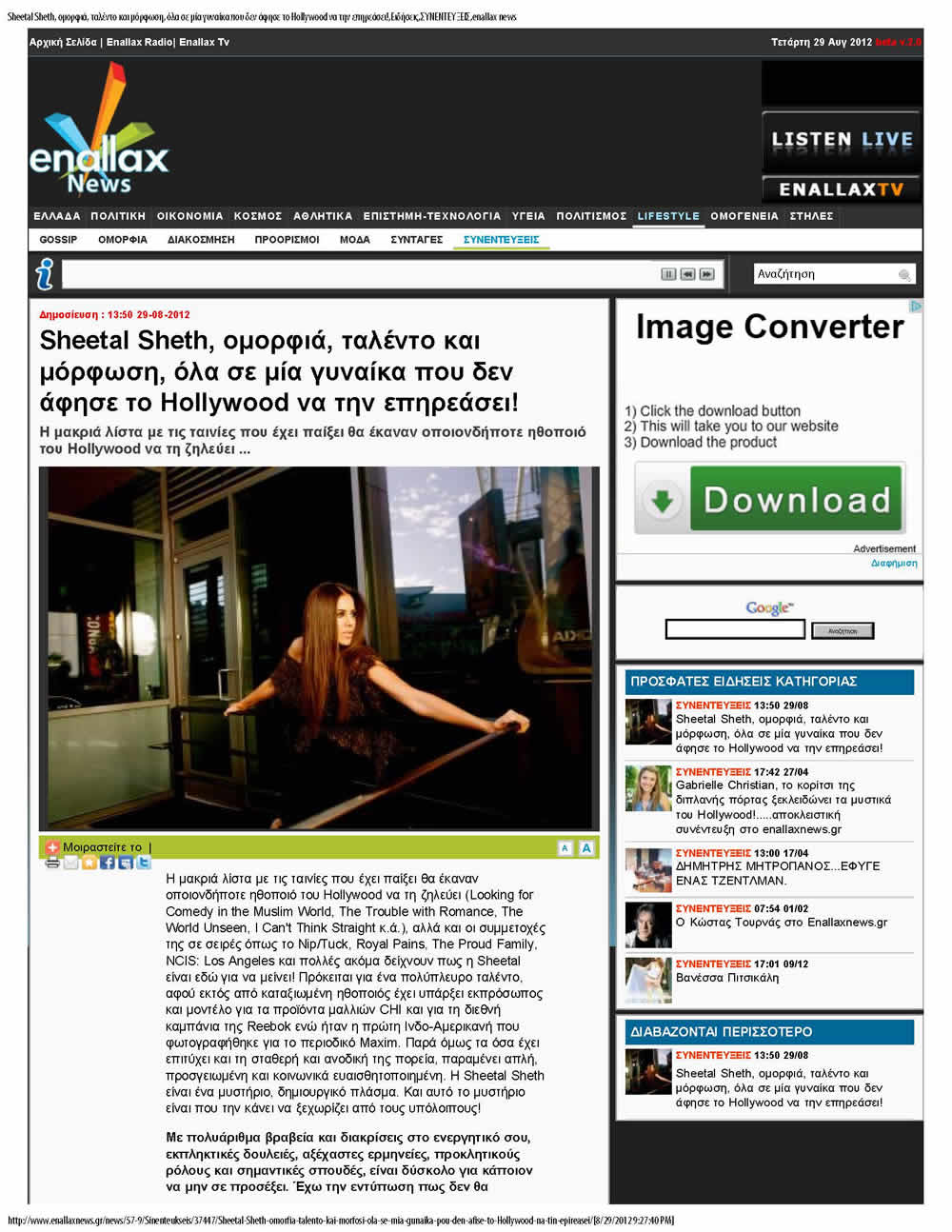